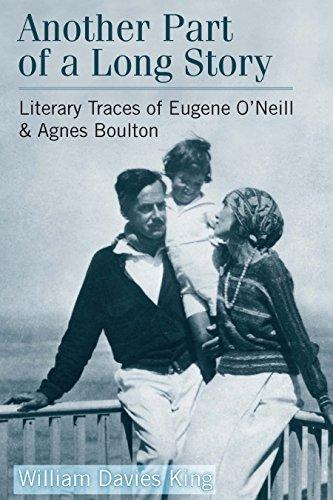 Another Part of a Long Story: Literary Traces of Agnes Boulton and Eugene O'Neill

"An engrossing biography about the marital breakdown of a major literary figure, of particular interest for what it reveals about O'Neill's creative process, activities, and bohemian lifestyle at the time of his early successes and some of his most interesting experimental work. In addition, King's discussion of Boulton's efforts as a writer of pulp fiction in the early part of the 20th century reveals an interesting side of popular fiction writing at that time, and gives insight into the lifestyle of the liberated woman."

Biographers of American playwright Eugene O'Neill have been quick to label his marriage to actress Carlotta Monterey as the defining relationship of his illustrious career. But in doing so, they overlook the woman whom Monterey replaced---Agnes Boulton, O'Neill's wife of over a decade and mother to two of his children. O'Neill and Boulton were wed in 1918---a time when she was a successful pulp novelist and he was still a little-known writer of one-act plays. During the decade of their marriage, he gained fame as a Broadway dramatist who rejected commercial compromise, while she mapped that contentious territory known as the literary marriage. His writing reflected her, and hers reflected him, as they tried to realize progressive ideas about what a marriage should be. But after O'Neill left the marriage, he and new love Carlotta Monterey worked diligently to put Boulton out of sight and mind---and most O'Neill biographers have been quick to follow suit.

William Davies King has brought Agnes Boulton to light again, providing new perspectives on America's foremost dramatist, the dynamics of a literary marriage, and the story of a woman struggling to define herself in the early twentieth century. King shows how the configuration of O'Neill and Boulton's marriage helps unlock many of O'Neill's plays. Drawing on more than sixty of Boulton's published and unpublished writings, including her 1958 memoir, Part of a Long Story, and an extensive correspondence, King rescues Boulton from literary oblivion while offering the most radical revisionary reading of the work of Eugene O'Neill in a generation.

William Davies King is Professor of Theater at the University of California, Santa Barbara, and author of several books, most recently Collections of Nothing, chosen by Amazon.com as one of the Best Books of 2008.