Skip to main content
How I Came to Hyper-Illuminate Books

Collage seems a logical extension of collecting. The words even sound related. (But aren’t. One is about gathering together, the other is about gluing.) At the time I began writing Collections of Nothing, I also began assembling (gathering) what I called my dictionary collection—a volume full of lexical illustrations. I cut up many dictionaries, leaving a large pile of ruined books, in order to compile and glue one new book, a wordless pseudo-dictionary, which is also a sort of collage but shaped like a book. Something about that act of cutting and reducing gave me joy, and soon I was making other book collages, or what I began calling bibliolages.

As I have developed the art of synthesizing books in this way, I have followed these guidelines: Each begins with an illustrated book (A) and a source of other illustrations (B, C, D,…). Every image in Book A is altered by images from Book B (C, D, E,…), and at the end Book A is full, while the other books are empty. I keep the one and throw the others away. At least two books are synthesized in the creation of a bibliolage, but one is augmented by being heaped (over-layered, imbricated, superimposed) while the other is diminished by being culled (eviscerated, raided, spent), and in some cases many books are synthesized to make the final bibliolage. The achieved book is ample; it usually bulges. The sacrificed source book or books seem exhausted and ready for the recycling bin. That ratio provides a means of downsizing—taking plentiful and useless books to a new synthesis, which is singular and potent. Every book used should hover at the very bottom layer of the book market, either valueless (a freebie) or cheap (from a library or church rummage sale), although I have exempted myself from this rule on occasion when I knew just what I needed or could not resist what I desired. I usually take special care to create a binding, a box, some dedicated cover to frame and protect the bibliolage, and I record all I can recall about the contents in a special notebook--and now on this website.

Mostly I work with the graphic elements in a book, super-layering an illustration with another illustration, so that, for example, a book of photographs of gargoyles suddenly contains a cut-out image of Tarzan on each of its pictures or a volume of paintings by Henri Rousseau takes on fragments of images from The History of Medicine. I call this hyper-illuminating. The heritage of this work is in the nineteenth-century craft of extra-illustration, in which favorite books were reconfigured to include more illustrations, to enhance the experience of reading the book. That craft was sometimes called Grangerization, after James Granger, who published a book that was commonly used to create an "improved" book. My extra-illustrating involves other motives beyond enhancement, but none of the work is done with photoshop or other digital means. Some of the bibliolages consist of a mashup of two source books (e.g. David Foster Wallace’s This is Water and a yoga manual); some draw from numerous sources (e.g. a book of “infinity pools” enhanced by miscellaneous images from the history of cartooning).

Sometimes, the primary book (A) will be made to match its mate (B) evenly, as in Diane Arbus Apocalypse, in which the pictures in Diane Arbus’s 1972 Aperture monograph precisely fit the pages of The Cloisters Apocalypse: an early fourteenth-century manuscript in facsimile. Or, in Giotto Gorey, I made two stories (words plus images) from Edward Gorey’s Amphigorey to fit into a book of Giotto frescos from the Scrovigni Chapel.

Sometimes, the match will be contrived as such, like Dali Dali, which began when I came upon Salvador Dali’s self-designed Harry N. Abrams book from 1968. I thought Dali would be an interesting challenge for me because his work also involves a kind of cutting things together. So I bought two more used copies of the same book and then enhanced Dali with more Dali and still more Dali.

Sometimes, the primary book (A) will provide the means of organizing the alteration, such as in In Response to Place, which is a set of ten portfolios of places in the Nature Conservancy, taken by ten photographers. Each portfolio received a different source of altering material, such as The Hamlyn Encyclopedia of Golf, The Lithographs of Thomas Hart Benton, and Mad Men: The Illustrated World.

Sometimes, I have incorporated words in the cutting, for example in Organic Gray Grain Koans, which brings Zen koans and passages from the journals of Spalding Gray into a book of wood grains, each page enhanced by images from a book on vertebrate biology, a numbered koan, and a sentence or two from Gray.

Sometimes, Book A is small, requiring only a few dozen alterations, as in The NRA Guide to Bambi, which enhances Walt Disney’s Bambi with guns from The NRA Guide to Firearms Assembly. A project like this might involve only a week’s work. Or On the Pulse of Morning I’m Going to Saks, which brings images from Saks’s 2010 catalogue of men’s fall fashion into Maya Angelou’s 1993 poem written for the inauguration of President Bill Clinton.

Sometimes, Book A is large, as in Wo ist der Heiliger Geist?, which begins with an 1886 German book about the Holy Lands. I altered its hundreds of steel point engravings with images from dozens of books and magazines. The title assigned to this book came to me in a dream, and the project took nearly a year to finish.

See the more recent bibliolages, with selected images, on this site. Also see the more or less complete list of works I have created.

The bibliolages are mostly not for sale, however I could make a bibliolage for you. You would choose the book to be hyper-illuminated, and I would select the material to be cut into the book. The price would be negotiable. 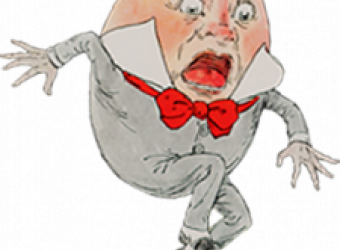 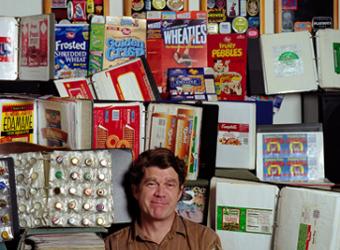