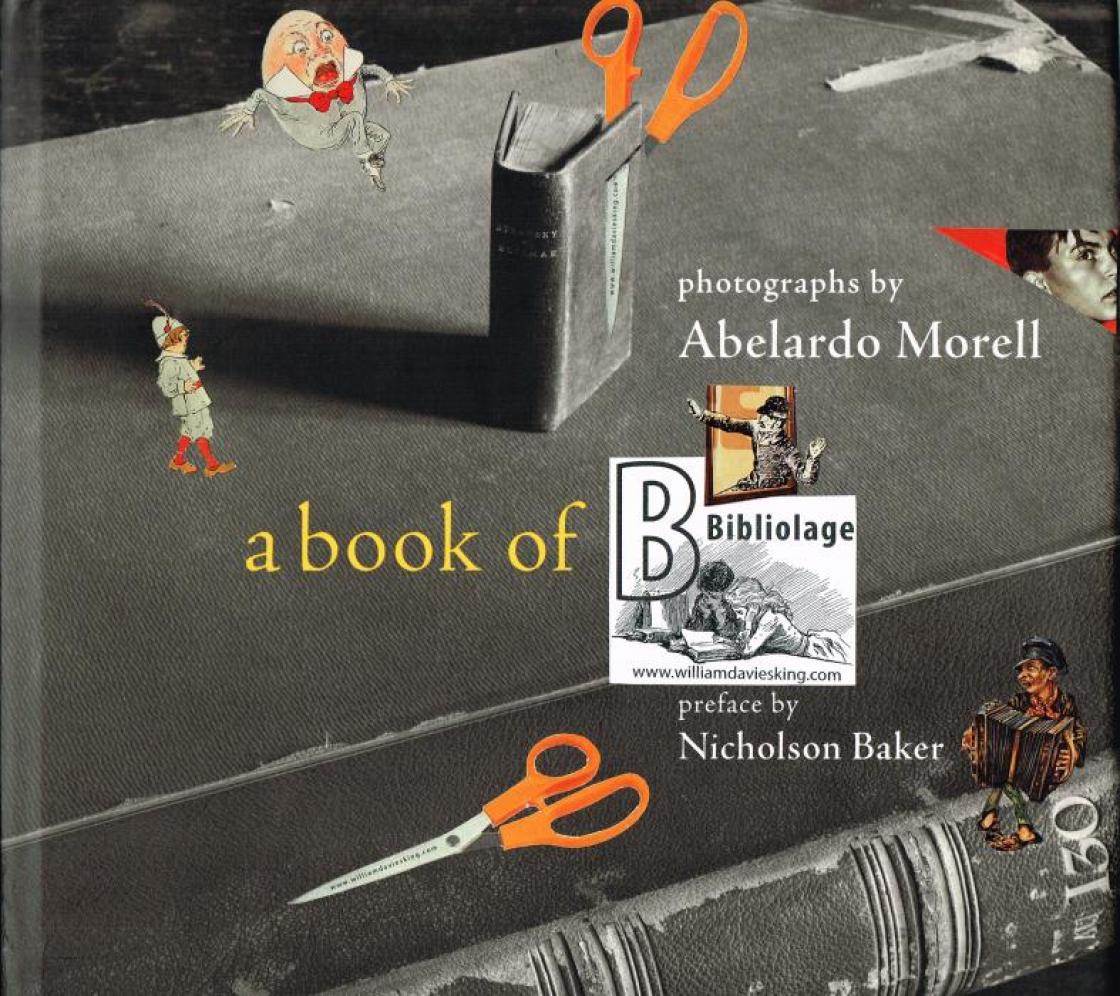 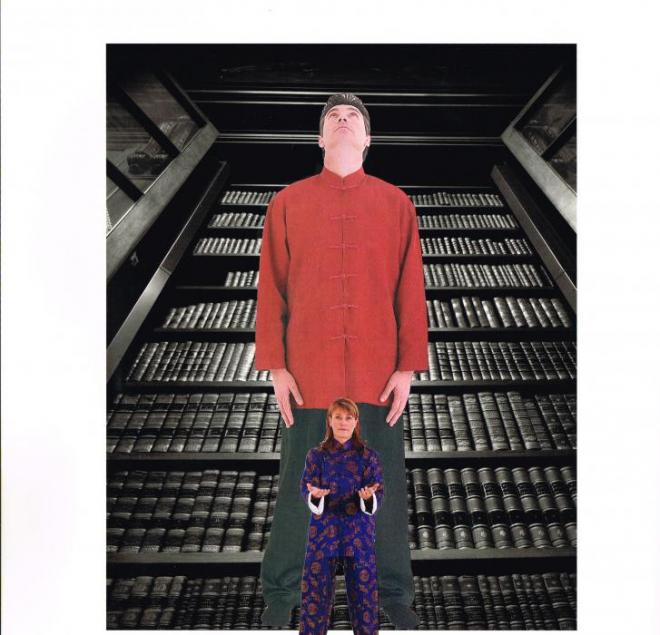 A Book of Bibliolage makes a good place to begin this blog. The website goes back a few weeks now. The practice of bibliolaging goes back seven to ten years, depending on your definition. The word bibliolage goes back about three years, my invention, I think. And the blog starts now.

A bibliolage is always an “altered book”—that’s the family—but, strange child in the corner, it abides by its own rules, sucks its very own thumb. (When I came up with the motto “Puerility Taken to a Whole New Level!” it made me smile, but it’s not terribly self-respectful.)

A bibliolage is also always a collage, but it so severely does not hang on a wall, I had to build a website to hang it anywhere.

A bibliolage sits on a shelf, here a creaky one, because the art takes a heavy book and makes it heavier. It takes a page and squares it, so the binding typically bulges. A library shelf keeps books aloft, vertical, slim, and Ssshhh-ed! My shelves sag, and the engorged volumes seem angry with being books. They protest at gravity, clamoring mirth. They revel in ruin and rue preservation. They do not resign to a system, least of all Dewey decimal. They do not speak for authority but squeal for special attention from the court.

On the site you can find a list of titles, some eighty-six in the columns as of now, but the ranks are uneven, as some have struck off in wayward directions, but so far no new tendency has turned me from the extraillustrative ‘lage. I discovered that it takes a nearly human gestational period to bring about a website. Steps must be ta

·  The Commedia dell’Arte of Andrew Wyeth

·  Armed America: ‘Toons for Our Times

·  After Nature and on the Eighth Day

·  The Diagnosis of Wild, Weird, and Wonderful Nervous Diseases

·  Medieval Guardians of Being Dead

I showed all but three of these at the launch/opening on January 10. I did not show Frank Sinatra: The Robot Who Found America (based in a book called The Men Who Found America—about Ponce de Leon and such people—with additions from a book about robots and another containing photos of Sinatra) because it’s fragile. By the end of making it, I was worried each time I opened the recipient book wide. The men who found America grow frail.

I also didn’t show Medieval Guardians of Being Dead (based in an Eckhard Tolle book, illustrated by Patrick McDonnell, combined with a book called Medieval Lives and another one filled with Day of the Dead images) or After Nature and on the Eighth Day (based in a W. G. Sebald book, combined with Abner Dean cartoon images) because I thought they were a tad obscure. I also did not show Nu Sexpuppen Icones (based in a deluxe volume showing nude imagery from paintings in the Louvre, combined with images of German collectible dolls and medieval Christian ikons) because . . . well, I’d blush.

All the other bibliolages held their own on the high drafting tables of the theater design studio in which they were exhibited, along with about twenty other, earlier works. I enjoyed watching friends peruse.

Around the time I began planning the opening, I cames across the photographer Abelardo Morrell’s beautiful A Book of Books(link is external), and it occurred to me that this book could form a summational hyperilluminative sampler, a chrestomathy (or should it be chrestopathy??) of bibliolagerie, with each picture suggesting a possible walk around the park of ruination. Every page would need a different counterpart.

The book now sits upon The Creaky Shelf in the website. The cover, of course, re-uses the design of the website, plus some imagery created by my daughters in the form of peel-and-apply-liberally stickers to promote the website. Didn’t need Elmer’s for them. The inside pictures give a sense of how I tried to cut my poor nothing into Morrell’s rich photographic meditation on the book.

I aim to update this blog once in a while, when I’ve got something new to show, but I’d also be happy to open up some older work. Have a look at the titles in my Catalogue of Ruined Books, and if you see one that makes you curious, let me know, and I will try to bring it out. 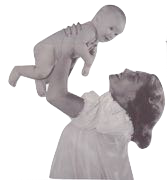 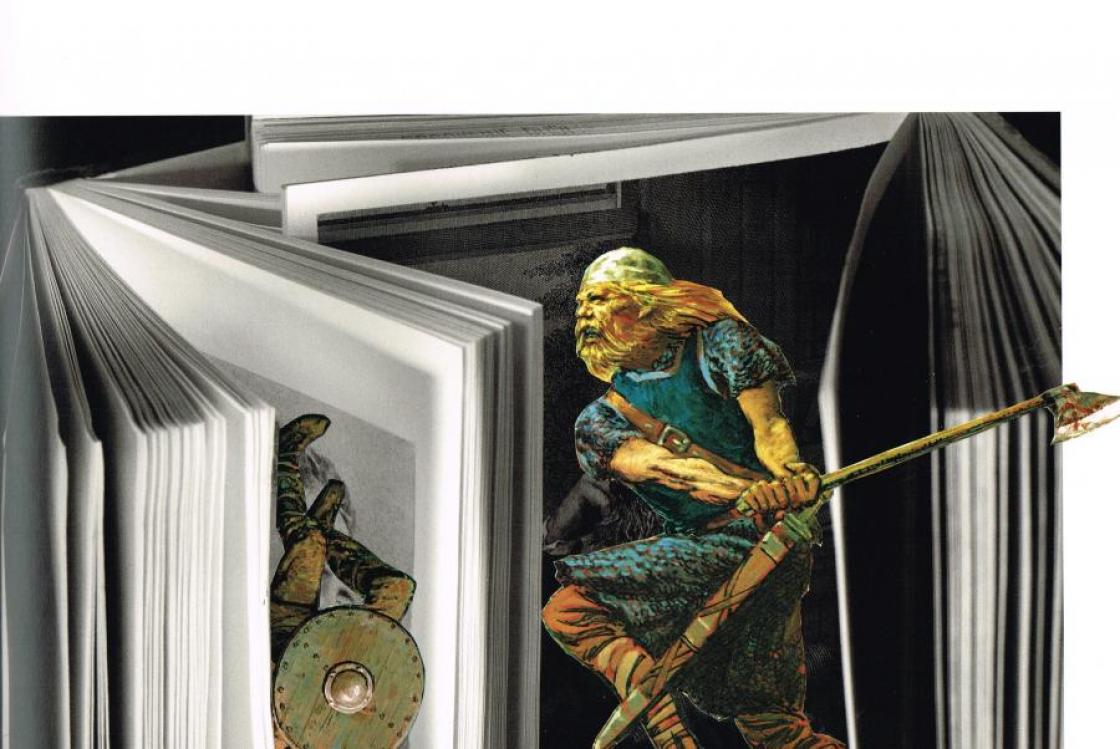